My auction career began in 1988 when a friend decided to downsize his ranch using the auction method of marketing. After hearing the rapid-fire chant of an Auctioneer calling bids all day while he sold real estate, equipment, horses, cattle, and personal property to over 300 registered bidders, I knew what I wanted to do for the rest of my life!

I have been blessed with the opportunity of working with some of the best auctioneers in the business, including world champions and many of the “greats” of our time. Since that day back on the farm, we have conducted or participated in thousands of auctions, gaining a high level of auction expertise, transaction experience, and service excellence.

I immediately began practicing on my chant. A few weeks later I began working for a leading auction firm by setting up sales, working in the ring as a bid assistant, and occasionally calling bids from the microphone. In the winter of 1989 I attended Missouri Auction School in Kansas City. I didn’t know it at the time, but some of my instructors included some of the “greats” of our industry. In 2011 I won the Oklahoma State Auction Championship, and since have placed in the top 10 of the International Auction Championship and the World Auto Auction Championship. 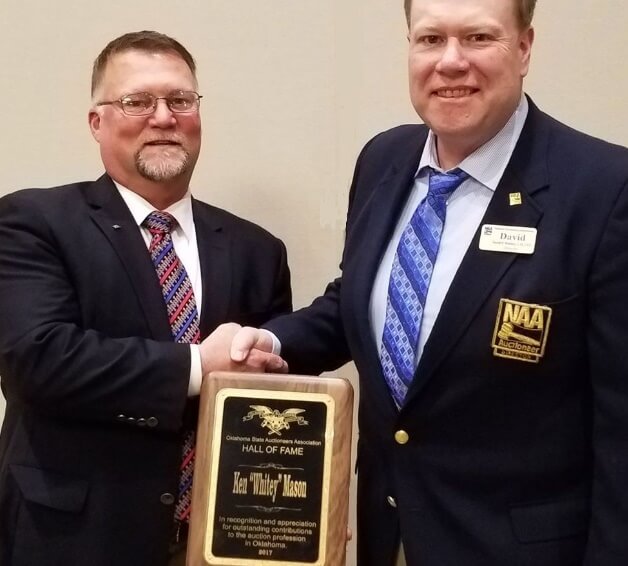 “Whitey Mason is one of those rare finds mixing aggressive business skills with integrity and honesty. Having known Whitey and worked with him on various occasions, I find it easy to give him the highest recommendation possible. Whatever your needs are, you will be glad that you spoke to Whitey about it. If he can’t be the best there is to do it, then he will tell you up front. However, you can rest assured that he will work and produce above and beyond anything he promises you.”

— Dan Boone, was with another company when working with Whitey Mason Auctioneers

“Whitey is a consummate professional in all aspects! Wonderful Auctioneer, and businessman. He strives to constantly educate himself in this fast paced world. I would highly recommend Whitey!”

— Shannon Schur, was with another company when working with Whitey Mason Auctioneers

“I worked with Whitey back in 2007 and he was an absolute joy to work with. His calm demeanor and upbeat attitude always made the day more pleasurable and you never had to worry about whether you could count on him to do his job. He never fails to give 150% with any endeavor he goes for and I would recommend him to anyone.”

— Jenny Lewis, was with another company when working with Whitey Mason Auctioneers

“Whitey is a phenomenal person to work with – I cannot say enough good things about him! He is very professional, always courteous, and he does his absolute best to make sure his customers are happy. I would absolutely recommend him… 100%!”

“Whitey is trusted marketer and auctioneer. The quality of his bid call is only second to his depth of character. I would trust him selling any asset I would need to liquidate.”

— T. Kyle Swicegood, was with another company when working with Whitey at National Commercial Auctioneers

“The first thing that comes to mind about Whitey is that he is has an old soul (honors life values, relationships and history at a deep level) and he is a great real estate professional/auctioneer. Men like Whitey are hard to find. He is extremely professional in high stress environments and I would recommend Whitey to any company or person who might have the privilege , as I did, to work with him.”

“Whether calling an auction of managing a deal, Whitey always delivers!He is an exceptional person, father, businessman, and auctioneer. Whitey is extremely passionate about every deal he works, and demands excellence from himself and from those around him. He is tremendously detailed, and informative. When I need an auction to be a home-run, or exceed every expectation, Whitey will be my auctioneer!”

“I have served with Whitey in the corporate setting and have always enjoyed working with him. I highly recommend his services.”

— Steve Mann, was with another company when working with Whitey at National Commercial Auctioneers

“Whitey Mason is simply one of the best auctioneers I have ever had the pleasure of working with. He is dedicated to his profession, committing himself to always learning more today than he was aware of yesterday and constantly seeking personal improvement in his life as a whole. He works extremely well with all parties to a transaction. People really like and trust him for obvious reasons. I highly recommend Whitey as “the best of the best” in the auctioneering profession.”

“Whitey is a gifted auctioneer who really knows how to get the job done. One of the best I have worked with, and that is a big number!”

“To Whom it May Concern, I have known Whitey Mason for 15 years and have always found him to be a professional in the industry which we serve. Whitey is highly experienced and trained auctioneer that always puts the clients needs front and center. Over the years i have continued to engage Whitey when i have a need for professional advice or experience in the auction fields which he serves and have always found his advice to be right on the money. I would recommend Whitey Mason for any projects i have coming up in his area. Respectfully, R. Shawn Terrel Vice President United Country Real Estate United Country Auction Services”

— Shawn Terrel, was with another company when working with Ken “Whitey” at National Commercial Auctioneers

“Whitey has provided me with outstanding Auctioneer skills for close to 20 years. He brings a high level of integrity to this profession, and can be relied on to maximize the value of any product he is selling. He can handle any sale from cradle to grave. If you are looking for a Superstar Auctioneer, then Whitey is your man.”